Skip to content
How women at work are stronger together!

“Me” — not “we” — has been the traditional mindset for women at work. Women in general rate high on nurturing, compassion, and empathy. These qualities are also essential for the best leaders today. But for too long, a scarcity of women in leadership positions has conditioned women to believe that we must be competitive with one another in order to succeed.

The truth is that most women are natural collaborators, a quality that we tend to embrace at a young age. The Organisation for Economic Co-operation and Development pooled data from 52 countries to examine how 15-year-old girls and boys perform when asked to problem-solve as a team. Get this: groups of girls didn’t just outperform in general. They outperformed in every single country surveyed.

OUR INHERENT STRENGTHS ARE WHAT MAKE US STRONG LEADERS

In a Pew Research Center study released earlier this year, women out-scored men in all but one of the study’s key research qualities. They are seen as more compassionate and empathetic; they were able to find compromises more effectively than men; they maintain a tone of civility and respect. It’s time to own our strengths, because it’s these qualities that make us great in the workplace.

Every workplace is unique; there is no “one size fits all” recipe for success. But there is a basic roadmap that applies to every industry: that when we stand out, stand up, and stand together, we all succeed. Recognize your own strengths, and surround yourself with others who can be strong where you are not. Collaboration is at its best — and most effective — when everyone taps into their unique strengths to orient toward a shared goal: collective success.

And women are uniquely suited to build collaborative relationships, both in their personal and professional lives. 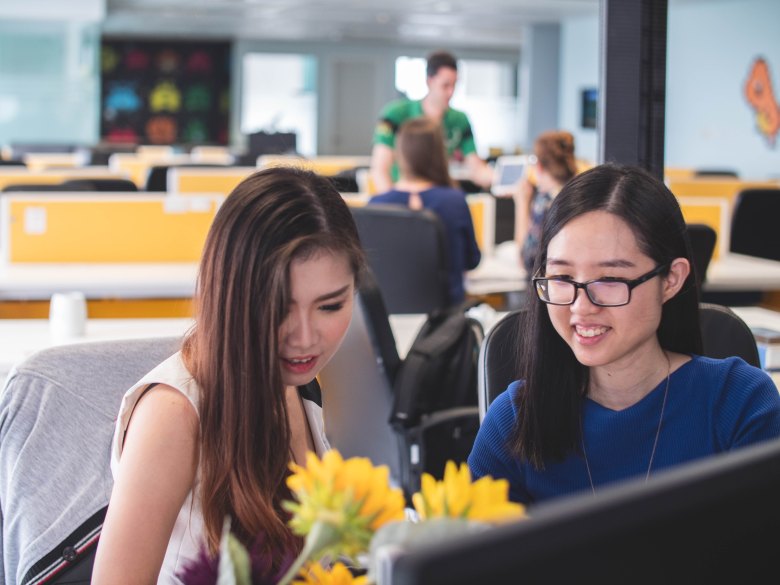 Collaboration in the workplace isn’t just a good idea; it’s good for the bottom line. Consider the 2017 joint study between The Institute for Corporate Productivity (i4cp) and Rob Cross, Professor of Global Business at Babson College, which examined more than 1,000 companies to determine what makes them successful. Their core finding? That high-performing companies were 5.5 times more likely to incentivize collaboration than their low-performing counterparts.

Or what about that 2017 Deloitte study, which found that “the creation of social cohesion is at the core of success… Employees that collaborate the most are happier and are more cohesive in teams than other workers.” People are more apt to be engaged in the success of their organization when they build collaborative relationships with their coworkers.

THERE’S POWER IN THE PACK

As women, we tend to band together. Take the “Tend and Befriend” study, which found that women respond to stress by seeking out and nurturing others, while men adopt the “fight or flight” mentality. For centuries, it’s been a survival tactic. But now, it’s a success tactic. When we invest in the success of one another, we have the potential to succeed together. The Shine Theory, used by female athletes in the Olympics, is the belief that when one woman helps another woman rise, we all shine. Women account for more than 48 percent of the global workforce; our time to shine bright is now. And collaboration over competition will help us advance equality a whole lot faster. A woman alone has power; together we have impact.

Shelley Zalis is the CEO of The Female Quotient. Start finding your pack on Hey! VINA today!