Skip to content
Ugh—how she deals with "friends" who only want to take photos with her.

The up-and-coming actress and an all-around cool girl Lilimar has had her fair share of friendship ups and downs. During VINAZINE’s exclusive interview with Lilimar, we talked about everything from the importance of childhood friends to her latest projects, plus how she manages to balance work and social life. Read some highlights below, vinas. We promise you’ll love her!

Q: Thanks for talking to VINAZINE! We’re all about friendship over here, and we’re wondering how you maneuver your friendships while living in the spotlight? Do you deal with fake friends or people using you for fame?
Lilimar: When I meet new people, I really like to get to know them and just really see their attitude, where their head is at, what they find important and what they don’t. If I don’t think they’re going to want me for anything other than, ‘Oh let’s take her picture so I can post it and get more followers’ than I don’t think it’s going to be a very productive friendship.

Q: That makes sense. So how have your friendships changed over the years?
Lilimar: I kinda grew up not forcing the mentality that I was going to have the same group of friends forever. But they’ll be there for maybe a couple of months or a couple of years, maybe they’re in your life to put you in a position to learn something from them since this person coming into your life will teach you some sort of lesson. Once I moved to LA, I would go back home and everyone was treating me different and asking the wrong questions. Out here, I’ve found more people who have the same kind of ideas and passion as me. You lose some and then you win some!

Q: So who is your best friend now, or do you have a couple?
Lilimar: Two of my best friends are Brady and Jaheem, who are also in the acting industry. And then I have more of a recent one who actually plays my best friend on the show I’m currently on, which is Savannah. We had all our scenes together and realized we’re practically the same person!

Q: What are your favorite things to do with your vinas?
Lilimar: It’s so hard because literally everybody here works or is in college, but we all like to hang out in pretty big groups. Every now and then, it’ll just be one-on-one and we’ll do something like hanging out at each other’s places, but most of the time, it’s five people or more and we’re just exploring LA. 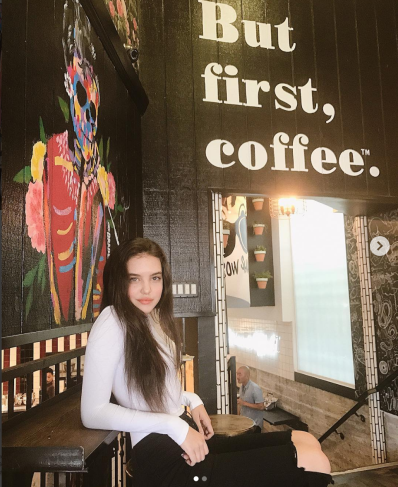 Q: What advice do you have for someone who’s looking to make new friends?
Lilimar: I know it’s very, very hard for some people to just go up and say ‘Hi’ to someone–it can be very nerve-wracking. But I think it’s really nice to hype yourself up every now and then and just say, ‘Hey, you should do it!” Obviously, you might not click immediately with that person, but the more you put yourself out there, people will see you as a person that they can come up to and talk to.

Q: Where do you see yourself going in the next five years?
Lilimar: I’m working on a show called “Knight Squad.” We’re all knights in training who go to school to train to be the next big knight of our kingdom, which is Astoria. My character is Sage–she’s a quirky charmer. She’s kind of like the black umbrella in the middle of a sea of rainbow umbrellas. We just got scripts for the second season, and shooting starts Oct. 29!

Thanks for talking to VINAZINE, Lilimar! Can’t wait to see all you accomplish in LA! Follow Lilimar’s advice and just say hi TODAY on Hey! VINA! Download now!