Making friends can be difficult, especially when you move to a new city. I remember struggling when I moved to London. Despite the 8 million people living here, not to mention the additional people commuting to London every single day, I never got into a conversation with anyone besides at work.

I’d just moved to a new flatshare where I didn’t know anyone. One Tuesday, I bumped into my housemate and we decided to go for a drink. We ended up in a wine bar, sharing a bottle of red wine. I barely knew her back then and expected several awkward silences, but we had a great time. I can’t explain why, but I could tell straight away that this would become a great friendship.

We said that we’ll repeat this someday. Usually, when someone says, “Let’s do this again soon!” you never end up doing it again. However, for some reason (probably because nobody ever makes plans on a Tuesday) we ended up meeting for a weekly glass of wine ever since. 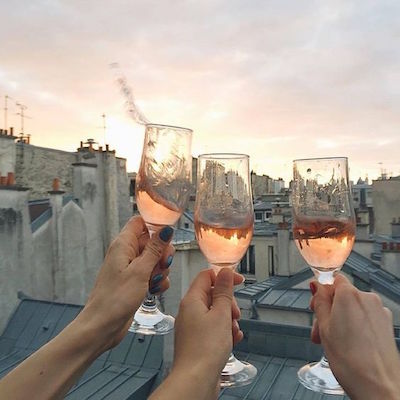 Today, we invite more and more vinas to join our wine sessions. This became such a regular thing that we refer to it as Wine Tuesday.

None of us is a wine connoisseur, but we can all agree if the wine we are drinking tastes good or not. Merlot, Riesling, and Chardonnay were all foreign words. That was until we learned how to study wine menus (which means to always go for the second cheapest, because we still have no clue).

It doesn’t matter which wine you go for. All that matters is the time you share with the people you share the bottle with. Obviously, you don’t need wine or alcohol in general to make friends, but for me and my vinas, it was the perfect stepping stone to a super fun tradition. Meeting the same bunch of people on a regular basis over a glass of wine facilitates deeper friendships that will eventually form!

Do you have any traditions with your friends like this? Tell us in the comments!